Jack is a Royal Society Dorothy Hodgkin Research Fellow and his research explores the properties of new nano-structured material systems, such as 2D materials and semiconductor nanowires, and translates this understanding into (opto)electronic devices with enhanced or novel functionality. He has held a research fellowship from the Royal Commission for the Exhibition of 1851, as well as a Junior Research Fellowship at Churchill College Cambridge. In 2015 he was awarded the Scopus Young Researcher UK Award in Physical Sciences. He received his DPhil in Physics from the University of Oxford with his thesis entitled ‘High magnetic field effects in low-dimensional carbon nanostructures’. Jack has PI status and is independent PhD student supervisor. [Publications] Vitaly is a Senior Research Associate in the Hofmann group with many years of experience in state-of-the-art 2D material production – especially in equipment and process development. He received his PhD from Oxford University where he studied methods for the growth of graphene, hexagonal boron nitride and tungsten disulfide by chemical vapour deposition. His additional research projects include nanomaterial utilisation in Li-ion batteries for industry and developing microscopy methods for biophysics applications. Vitaly also holds a MPhys degree in Physics from Oxford University. His current research interests include increasing the readiness level of 2D nanomaterial for disruptive applications.[Publications]

Ye is a Postdoctoral Research Associate in the Hofmann group. He received his B.Eng. degree from Tsinghua University, China, where in his thesis he studied Monte-Carlo simulations of nucleation and crystal growth. He then joined the University of Oxford, UK, as a Clarendon scholar and received his DPhil degree with his thesis focussed on electronic and optoelectronic applications of CVD 2D materials. His research now focuses on integrated 2D materials CVD for device application. Sumit is a Postdoctoral Research Associate in the Hofmann group with several years of experience in Surface science, Surface Spectroscopy and Device fabrication. He received his PhD from the University of Groningen where he studied the self-assembly of smart organic molecules, including molecular machines on different surfaces and proof-of concept non-volatile memory device work. He graduated with a masters degree in Materials Science from the National Institute of Technology, Durgapur, India. His research now focusses on in-operando electron spectroscopy and microscopy to explore 2D crystal growth. Lucas is a Research Associate in Advanced Crystal Growth of Monolayer Oxides in the Hofmann group. He undertook his PhD at Manchester University working within the group of Prof Andre Geim at the National Graphene Institute and Physics Department. He has studied ion transport properties of 2D materials, with a particular focus on ion exchange and proton transport of monolayer and few-layer oxides. He has gained significant experience in 2D material device fabrication and ion transport characterisation working with both CVD and mechanically exfoliated materials. He has a particular skill set in the fabrication of targeted freely suspended samples for high-quality characterisation via S/TEM, AFM, and other characterisation techniques. He holds an MPhys degree in Physics from Lancaster University. [Publications]

Oliver joined the Hofmann group as a PhD student in 2016 and is now a NanoDTC Translational Prize Fellow, researching integrated routes to 2D material synthesis and subsequent application. He obtained a bachelors degree in 2015 from the University of Nottingham in Physics with Theoretical Physics; then completing a masters degree in Physics at Cambridge. Oliver is now a Bye-fellow at Fitzwilliam college. [Publications]

Ruizhi joined the Hofmann Group in 2014 as a PhD student and now focuses on 2D material based biosensing. He is co-founder of HexagonFab that designs and commercialises biosensors for rapid clinical diagnostics, life science research, & industrial monitoring. He graduated in 2014 from ETH Zurich with a masters degree in Mechanical Engineering focusing on Nanotechnology. Ruizhi is a member of Pembroke College. [Publications] Lukas is an embedded researcher in the Hofmann group working on nanomaterial biosensors to measure protein interactions. Prior to this appointment, Lukas completed an MPhil in engineering at the University of Cambridge, where he helped develop organ-on-chip technologies.

Tomasz joined the Hofmann group as a PhD student in 2013. His research project focussed on interactions between graphene and liquid crystals. Tomasz obtained his Master’s degree in Chemical Physics from the University of Edinburgh. He is a member of Nanotechnology Doctoral Training Centre and St. Edmund’s College. Vlad joined the Hofmann group as a PhD student in 2017. His work focuses on the growth and characterisation of 2D heterostructure materials. He obtained a MEng degree in Electrical and Electronic Engineering from Imperial College London in 2017. He is a member of Wolfson College.

Ryo joined the Hofmann group as a PhD student in 2017. His work focuses on the development of new CVD reactor designs for 2D material crystal growth and device integration. He completed his undergraduate studies at the University of Bath in Natural Sciences majoring in Physics, and began his postgraduate studies at Cambridge in 2016 as a student of the Doctoral Training Centre for Nanotechnology (NanoDTC). He is also a member of Christ’s College.

Callum is a PhD student in the Hofmann Group; joining in 2018. He works on the development of single photon emitting devices utilising 2D materials for quantum technologies. He holds a Master of Engineering degree from University College London and continued his graduate studies as a student of the CDT in Graphene Technology at the University of Cambridge in 2017. He is a member of Homerton College. [Publications]

Alice joined the Hofmann group as a PhD student in 2019. She is a member of the NanoDTC, and is jointly supervised by Dr. Sam Stranks in the Optoelectronics group. Alice completed her MChem with industrial experience at the University of Edinburgh and NTT, Japan. She obtained her Masters in Research with distinction at the University of Cambridge. Her research now focuses on the growth and characterisation of hybrid perovskite single crystals. She is a member of Lucy Cavendish College. [Publications]

Irina joined the Hofmann group as a PhD student in 2019. Her research interests include studying memristive effects in 2D nanomaterials for device applications. She holds an MSci degree in Chemistry from University College London. During her masters project, she worked on predicting the materials properties of graphene-polymer systems via molecular dynamics simulations. She is a member of Girton College.

AbdulAziz joined the Hofmann group in 2020, being co-supervised by Dr. Antonio Lombardo. His research focuses on the electrical properties of mixed dimensional heterostructures. He mainly explores heterostructures between 2D materials (such as graphene, TMDs, hBN, etc.) and conventional semiconductors (like Si, Ge and GaAs); and their uses in the design of novel nanoelectronics devices. He holds a BASc degree in Nanotechnology Engineering, honours, and MASc degree in Electrical and Computer Engineering (Nano) focused on nanoelectronics devices based on layered materials from the University of Waterloo. He is a member of Wolfson College. [Publications] Wadood joined the Hofmann group as a PhD student in 2020. He is a member of the EPSRC Sensor CDT. His research focuses on developing electronic platform technology for in-vitro digital protein sensing based on electrolyte-gated graphene-FETs. Wadood has recently obtained his Master in Research at the University of Cambridge in sensors technologies and applications. He holds an MSc degree in Electrical and Electronics Engineering with distinction from the University of Glasgow. During his master’s project, he developed an in-vitro biosensor for vancomycin detection based on magnetic sensing. He is a member of Robinson College. Linyuan is a PhD student in the Hofmann group, as well as a member of the EPSRC Graphene CDT. His research focuses on the in-operando studies of novel 2D and layered materials, and their opto-electronic device applications. He holds an MA degree in Chemistry from Rice University, an MRes degree in Electrical Engineering from University of Cambridge, and he was a researcher in Electrical Engineering/Physics at MIT. Linyuan is a member of Pembroke College. 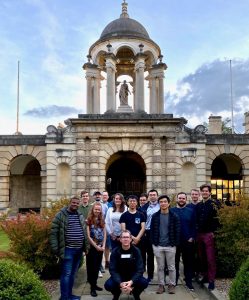 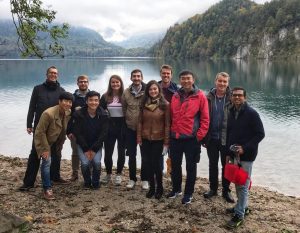 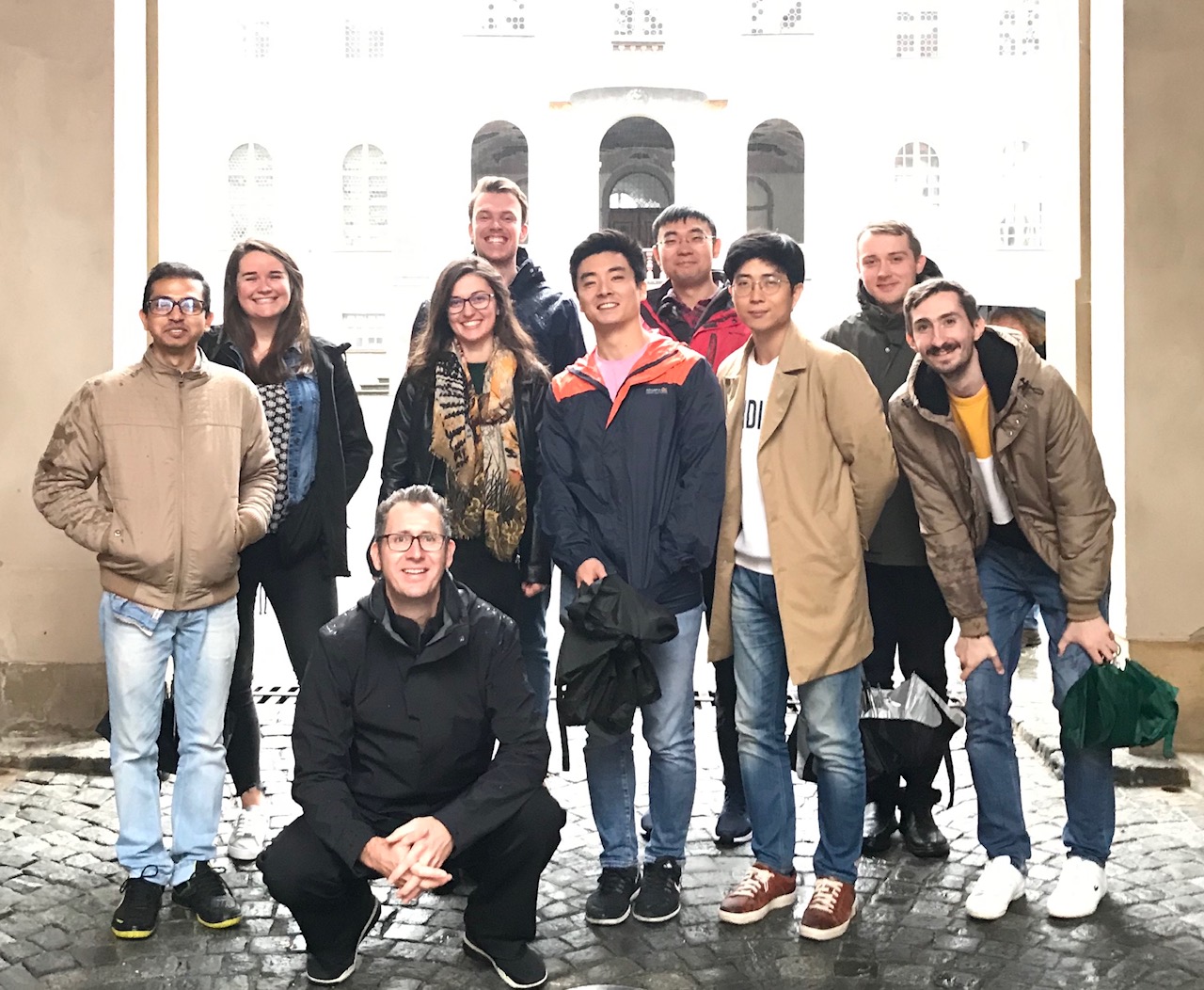 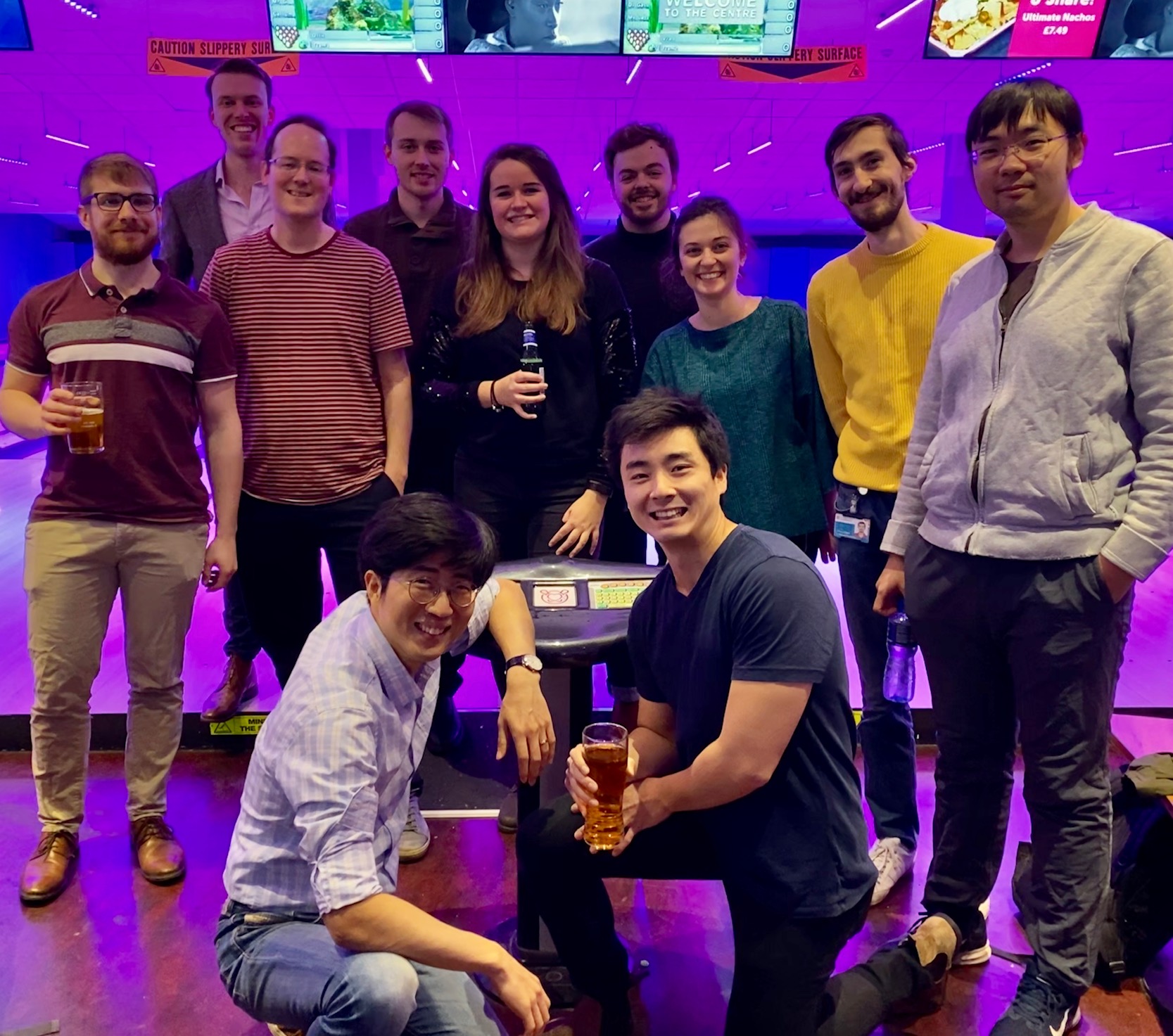